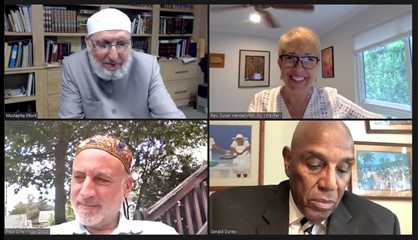 On Tuesday (August 9), Imam Mustapha Elturk, Ameer of the Islamic Organization of North America (IONA), participated in an important interfaith webinar titled “Encouraging Faith Communities to Vote - Sermons on the Importance of Voting.” The webinar was hosted by the Interfaith Power & Light whose mission is to inspire and equip people of faith to exercise stewardship of and love for all Creation. Imam Elturk representing the Islamic faith was joined with the Rev. Dr. Gerald Durley and Rabbi Fred Scherlinder Dobb from Adat Shalom Reconstructionist Congregation. Rev. Susan Hendershot, President of IPL, led the discussion.

In response to, how do the Quran and Muhammad speak to voting in a 21st century American democracy? Imam Elturk stated that Muhammad (peace be upon him) in the 7th century established Islam based on Divine Justice and aside from being a Prophet, he was the political leader and head of the Islamic State. In comparison to modern day elections, the system of Bai’ah or allegiance was an expression of the collective vote or people’s acceptance to the election of the Caliph.

The Imam gave examples from two great scholars who wrote on Islamic polity, Al-Farabi, who in his famous work on ‘The Virtuous City’ considered democracy to be closest to the ideal state as practiced during the times of the rightly guided caliphs, and Muhammad Iqbal, who wrote ‘The Reconstruction of Religious Thought in Islam’, also viewed the early Islamic caliphate as being compatible with democracy.

Imam Elturk mentioned how he stresses to those who are registered to vote to actually vote. Also, the need to register to vote for those who are citizens but not yet registered. Civic engagement is an obligation, it is not a choice, according to Imam Elturk.

The Imam cited the verse, “O you who believe! Stand out firmly for Justice as witnesses to Allah, even if it is against yourselves, your parents and close relatives…” (al-Nisa’, 4:135). He also shared the well known hadith (saying of the Prophet) on stopping evil, “Whoever among you sees an evil action, let him change it with his hand [by taking action]; and if he cannot, then with his tongue [by speaking out]; and if he cannot, then with his heart [by feeling that it is wrong] – and that is the weakest of faith.” (Narrated by Muslim)

When asked about faith leaders being apprehensive about voting, Imam Elturk admitted that some faith leaders and Muslims believe that participating in the electoral process and voting is against Islam. However, the Imam believes that most Islamic Centers do actually encourage voting in the U.S. and that, “The narrative of whether Muslim American citizens are permitted to vote in the national or local elections has been debated and the overwhelming majority of scholars domestically and abroad have permitted the participation in the political electoral process” said Imam Elturk. He also acknowledged that 501 (C) 3 non-profit organizations are non-partisan and are not allowed to endorse a particular candidate or party. However, Imams and community leaders may invite candidates to their mosques and present themselves and what they have to offer. One needs to be informed on issues and on those running for office.  Imam Elturk encourages his community to vote their conscience.

Rev. Durley and Rabbi Dobb weighed in on the subject citing verses from the Bible and Talmud.

The webinar ended with each religious leader making a supplication for justice.

Clips from the webinar may be viewed at:

For the entire webinar go to:

____________________
IONA’s mission is to transform its members and help transform the surrounding communities to righteous, God-fearing people, who collectively strive for the highest moral standard and constantly seek forgiveness from our Creator to earn His pleasure. We seek His compassion and mercy in this life and in the hereafter. We rejuvenate our soul through internal struggle and spiritual exercise in worship of our creator God. The strength of our belief in God gives us the courage to establish good and forbid evil, thus promoting a system of justice for all mankind.

IONA's objective is to help the Muslims of North America understand and fulfill their divinely ordained obligations, in order to please Allah (SWT) and thereby achieve success and salvation in the Hereafter.

Subscibe to our mailing list and stay up to date with our upcoming events and latest news. We promise not to share your email with anyone except you.